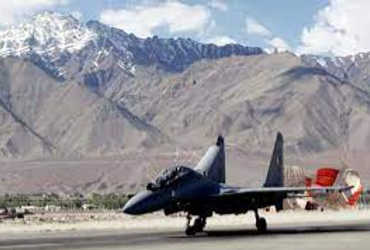 Tension between India and China in eastern Ladakh has not subsided yet. In addition, China is expanding its air force facilities by expanding new or existing airbases in India’s northern border regions. An intelligence report has identified 12 such airbases not far from Ladakh, Himachal Pradesh and Uttarakhand.

Most of these airbases in China are in Zhejiang province. The boundaries of this province touch the borders of Pakistan, Afghanistan and Russia apart from India. Apart from this, China is developing two new airbases near Arunachal Pradesh. The three airports near the Indian border include Ali Gunsa, Burang and Tashkent airports. The airport is designed for both civilian and military use.

Tashkent is the most important and newest airport in Pamir near Karakoram Ghat. It is located north of Gilgit in Pakistan-occupied Kashmir. Perched on a plateau at an altitude of over 10,000 feet, the airport is close to the important Siachen Glacier under Indian control. The construction of China’s westernmost airport began last year following tensions in Ladakh. China considers this airport an important strategic base. The airport is close to the borders of Tajikistan, Afghanistan and Pakistan. The airport is expected to be operational by 207. The Karakoram Range to the north of Ladakh is a very strategic area for both India and China. Around the Karakoram range, China has expanded facilities at five airbases in Hotan, Shache, Kashi, Tashkent and Yutian Wangfang.

In addition, Ali Gunsa Airport is close to the city of Shikanhe in civil province at an altitude of about 12,000 feet from Ladakh, Himachal and Uttarakhand. It is also known as Civil Kunsha Airport. It is 300 km away from Ladakh. It is far away and its proximity to Himachal Pradesh and Uttarakhand adds to its strategic importance. Not only this, it is one of the first class airports.