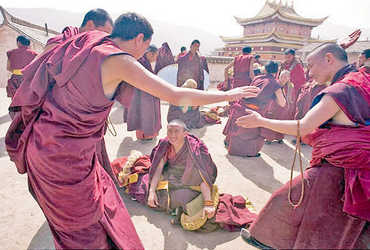 BEIJING: Chinese authorities are making arbitrary arrests of Tibetan Buddhist monks in China’s Sichuan province. Not only this, they are also being beaten up. He is accused of informing outsiders about the demolition of a 99-foot-tall Buddha statue in Luhuo County.

Several historic Buddha statues were demolished by China in Tibet last December. Although his information was kept secret, Buddhist monks in Tibet leaked it to the public. So now China is finding these sadhus and killing them.

On the other hand, the officials claimed that the idols were made at high altitude and hence needed to be destroyed. However, the desecration of Buddhist statues in this way has caused great outrage among Buddhist monks and Tibetans.

They are expressing their sorrow, for which China is suffering. Chinese authorities recently arrested 11 Buddhist monks from a monastery in Drago. Shruthnika media claims that the arrest was made on the charge of giving information to outsiders.