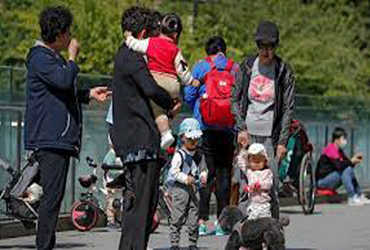 Beijing: Couples in China can now have three children. It is no longer a crime. The National Executive of China’s ruling Communist Party formally endorsed the three-child policy. China amended its policy in 2016 to allow the birth of two children. China has been forced to adopt this policy in view of its rapidly declining population. Thus China has had to top its one child policy.

The Standing Committee of the National People’s Congress (NPC) passed the amended Population and Family Planning Act. Chinese couples are now allowed to have three children. Due to rising inflation in China, people are giving birth to fewer children. To address these concerns, measures have also been taken in the law to increase social and economic cooperation.

According to the state-run China Daily, the new law will include collaborative measures in finance, tax insurance, education, housing and employment to reduce family burdens along with raising and educating children.

In May of this year, China’s ruling Communist Party of China allowed all couples to have three children, allowing its two-child policy. In 2016, China scrapped its decades-old one-child policy and allowed the birth of two children. China’s policy makers blamed the one-child policy for the impending population crisis in the country.

This stand of China is a big lesson for India. The case of China is a red beacon for many Indian states, which are currently in the grip of the two-child policy and view the growing population as a big curse.