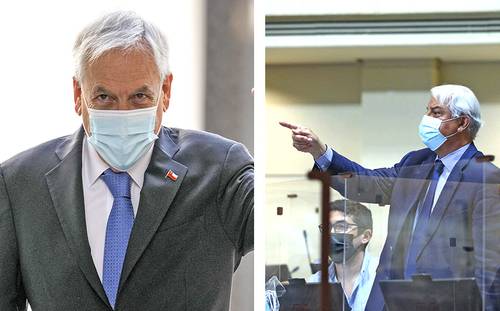 ▲ The Chilean president, Sebastián Piñera, at the Palacio de La Moneda. On the right, the socialist deputy Jaime Naranjo, who spoke incessantly for about 15 hours, with just two pauses, in a strategy to allow time for two legislators to reach the vote in the lower house. Photo Ap and Afp / Chilean Chamber of Deputies / Johanna Zárate

Santiago. After a marathon 22-hour session barely interrupted a couple of times, the Chilean Chamber of Deputies approved by 78 votes in favor, 67 against and three abstentions a constitutional accusation against President Sebastián Piñera, something unprecedented in the country’s history, which He could end in his dismissal in a few days, with four months to go to the end of his government.

The parliamentarians began to meet at 10 a.m. on Monday (local) and the outcome took place around 7:30 a.m. yesterday. The hero of the day was the socialist deputy Jaime Naranjo, 70, who spoke incessantly, with just two pauses, for almost 15 hours to buy time and allow two parliamentarians whose vote was essential to approve it, could reach the headquarters of Parliament, after overcoming suspicions of contagion from Covid-19.

It is now up to the Senate, which will act as a jury, to pronounce itself, which will happen next week. Although there things look a little better for the president, because the opposition only has 24 of the 29 votes required to ratify it.

In any case, it is a terrible and devastating blow for Piñera, one more for his second presidency that has been a disaster since the social outbreak of October 2019, just when he said that the country was an oasis of peace and intended to build a kind of international leadership from the holding in the country of the 25th United Nations Conference on Climate Change, which was transferred to Spain due to the political and social instability here.

It is the second time that Piñera has faced impeachment; The first, which failed, was in November 2019, as a result of the flagrant violations of human rights committed in the repression of social protests, which left dozens dead and hundreds injured.

Piñera, whose approval ranges around 15 percent, was held responsible for openly violating the Constitution and laws on probity and for seriously compromising the honor of the nation.

The impeachment was prompted by the Pandora Papers, which betrayed Piñera and his family by negotiating, in 2010, during his first presidency, in the Virgin Islands tax haven for the sale of 33 percent of a mining project in northern Chile. for 138 million dollars, conditional on the area where the mine would be installed, not receiving environmental protection, because that could hinder the business.

But the accusation went further and recalled that Piñera, who appraises almost 3 billion dollars of personal fortune, throughout his life mixed business and politics, always acting under the suspicion of conflicts of interest, the use of privileged information to the that acceded and abusing its position of power to benefit from third parties.

The text of the accusation pointed this out when it said that what occupies our attention is not a specific error or, even, an isolated act of greed or use of power for our own benefit. No, it is a behavior that has always accompanied Piñera, known to all, and that has harmed many compatriots or the entire country.

From the government, in a state of shock, the Minister Secretary General of the Presidency, Juan José Ossa, affirmed that “an unjust accusation was approved, with an obvious electoral use since it was presented. And more than if we make a self-criticism, we are saddened by what we have seen, a political and media show, unacceptable and very painful for democracy, more than for the government.

We hope that good sense prevails in the Senate, but we feel very sad for this wound that has been done to the country, there is an opposition that seeks to destroy the government, he added.

In polls, 70 percent say they are in favor of impeachment.