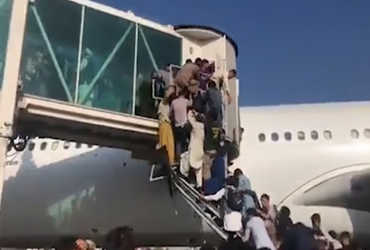 – Line of people engaged to withdraw money from banks, thousands of people were seen running on the road to go to the airport, fierce stampede

– People run to neighboring borders, try to infiltrate: take vehicles and leave in search of a safe place

Kabul: There is an atmosphere of chaos at the airport in Kabul, the capital of Afghanistan. Currently, it is the only airport that is yet to be controlled by the US military. As a result, people are leaving their luggage and running for a place on every plane that flies here. People were seen running on the runway. While some are also trying to hang in the plane.

Seven deaths have been reported amid chaos at Kabul airport. The exact cause of death was not immediately clear. A report claimed that some of those killed were linked to the Taliban. The airport is currently under chaos and was fired upon by the US military to disperse the crowd.

Videos from Kabul airport are going viral. In which many people are seen running behind the plane to board the American plane. When the plane took off, three to four civilians were hanging rather than getting down from the plane, although three civilians were killed when they fell from the air.