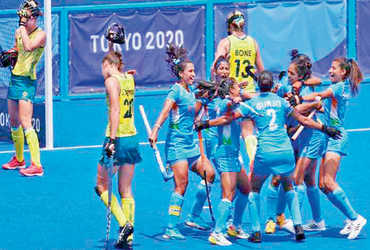 Beat Australia 1-0 in the quarterfinals, now against Argentina in the semifinals tomorrow

Australia could not score despite eight penalty corners: India got only one goal

Tokyo: India’s women’s hockey team has reached the semi-finals for the first time in its Olympic history. The hockey world’s big upset came with a 1-0 win over Australia today. India got only one penalty corner in the match which they converted into a goal while India thwarted Australia’s eight penalty corners.

India’s Gurjit Kore converted a penalty corner in the 22nd minute which was the only goal of the match. Australia reached the quarter-finals of the Olympics without losing a match, while India returned after losing three consecutive matches in the group.

Goalkeeper Savita’s biggest contribution can be said in India’s victory. He did not allow Malone’s power shot into the goalpost to prevent Australia from scoring in the first quarter of the match. India’s fast and aggressive pace of play was unimaginable for Australia so they got frustrated and went into the defensive style.

India had a chance in the ninth minute to score with a stroke from Rani, which Australia cleared. India’s women’s hockey team qualified for the 1980 Olympics for the first time. He then directly qualified for the 2016 Rio Olympics. In which he got the last position. Thus India can be called a giant deer.

Australia got their first penalty corner in the 20th minute of the attack. Which India failed. Gurjeet scored from a penalty stroke in the second minute.

Goalkeeper Savita played an impenetrable wall when Australia were desperate to score in the final leg of the game and were awarded three consecutive penalty corners.

Deep Grace Ekka’s defense game was also remarkable. Australia got four penalty corners in the last eight minutes but did not succeed. The Australian cried in great despair.