Canadian sentenced to 11 years in China for espionage 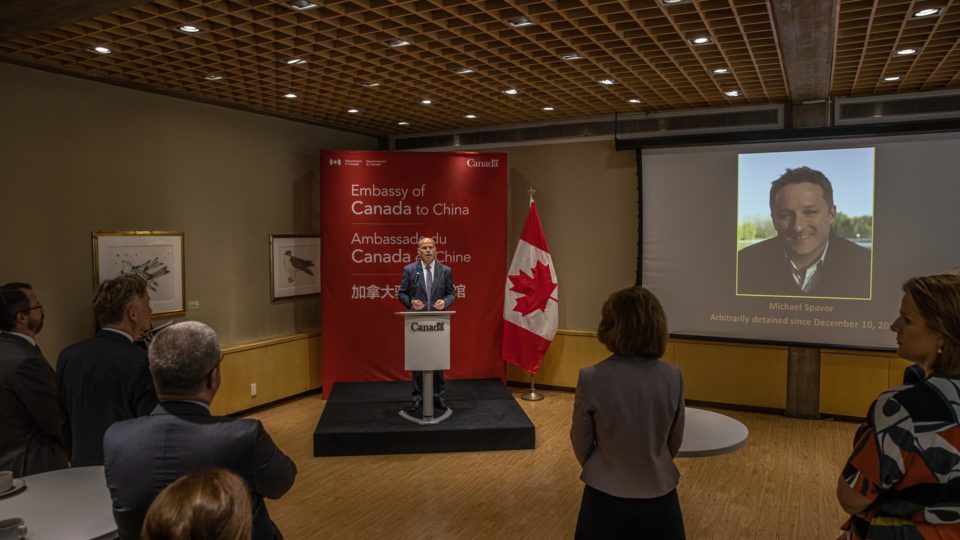 Jim Nickel (C), Deputy Head of the Mission of the Canadian Embassy in Beijing, speaks with Canadian and foreign diplomats about Michael Spavor’s verdict in Beijing, China on August 11, 2021 | Photo: PILIPE ROMAIN / EFE

A Chinese court announced on Wednesday (11) the 11-year prison sentence for Canadian citizen Michael Spavor, imprisoned since December 2018 for espionage.

According to the ruling, the executive, who worked in Beijing and frequently traveled to North Korea, was found guilty of providing state secrets to foreign governments. No evidence against the businessman has been presented publicly. The trial was held in secret in March.

Spavor was arrested shortly after Huawei executive Meng Wanzhou was arrested in Vancouver, Canada on December 1, 2018. Under house arrest, the chief financial officer of the Chinese tech giant is accused of violating US sanctions against Iran and could be extradited to the United States. Therefore, the case of Spavor and other Canadian citizens imprisoned in China is widely viewed as a retaliatory measure by the Chinese government against Canada.

Canadian Prime Minister Justin Trudeau said Spavor’s conviction was “unacceptable and unfair”. “The verdict for Mr. Spavor comes after more than two and a half years of arbitrary detention, a lack of transparency in the judicial process and a judgment that did not even meet the minimum standards required by international law,” he said. stated in a press release. .

Another Canadian citizen, Michael Kovrig, has also been charged with spying and stealing state secrets in China. His sentence has not yet been announced.

On Tuesday, a Chinese court upheld the death penalty for Canadian Robert Shellenberg, convicted of drug trafficking. He was originally sentenced to 15 years in prison, but after appealing he was sentenced to death – the change in verdict came after Meng’s arrest.