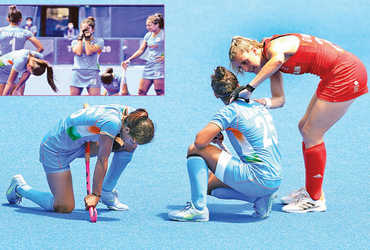 Today is the last day in the Olympics for India

For the first time, India’s fans were proud of the team’s performance despite being denied a bronze. Although the Indian women’s team was crying on the field after the defeat and even after that. Great Britain won by just one goal. India took the lead and gave Great Britain a chance to win.

Wrestling was also a promising day for India. In the 65kg class, Bajrang Punia was considered a gold medal contender considering his top rank and record. At least he won the silver medal in the quarterfinals today and lost in the semifinals. Now he has a chance to win a bronze medal. The clash will happen tomorrow.

India is also hopeful that Neeraj Chopra will win a gold medal in the javelin throw event. He has already won the Asian Commonwealth and World Junior Championships but reached the Olympic final with the longest distance of 86.65m.

Even if he maintains the mark, his chances of winning a medal are strong. Aditi Ashok, who finished second after three rounds in golf, is also likely to win a medal tomorrow. India will conclude the Tokyo Olympics tomorrow with Aditi in golf, Bajrang Punia in wrestling and Neeraj Chopra in javelin throw.