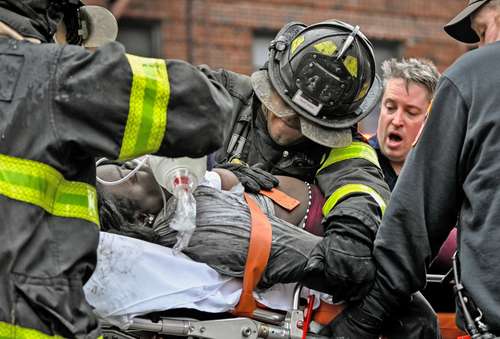 ▲ A member of the firefighting squad performs CPR on one of the evicted victims of the 19-story multifamily on East 181 Street in the Bronx neighborhood of New York. Photo Ap

New York. Nineteen people died, including nine children, and dozens were injured this Sunday because of a fire in an apartment building in the New York neighborhood of the Bronx, in what represented one of the worst accidents in the history of the city, announced Mayor Eric Adams.

Sheriffs determined through physical evidence and first-hand accounts from residents that this fire started in a bedroom because of a probable short circuit in a portable electric heater, the New York City Fire Department commissioner told reporters. (FDNY), Daniel Nigro.

Adams stated that the death toll from the fire was horrendous and that “this is going to be one of the worst fires we have witnessed in modern times.

There are 19 people who are confirmed dead, as well as others in critical condition, 63 more were injured in the fire, Adams, who has a week in the position of mayor, told CNN.

Dozens of residents of the multifamily were taken to the hospital for a proper assessment of their physical condition. More than five dozen locals were injured and 13 of them remain in critical condition at the hospital, said Stefan Ringel, an advisor to Adams.

Both the New York Times and CNN cited unidentified officials accounting for nine children among those killed.

At least 200 firefighters participated in the extinguishing of the fire that arose at noon this Sunday on the second and third floors of a 19-story building, in the heart of the Bronx, at Twin Park Apartments, a building on East 181st Street, according to the FDNY.

Neighbors recounted seeing desperate residents waving from higher floors, apparently trapped and unable to get out.

From the windows of the raised floors, several people called for help

It was chaos, Goerge King, who lives in an apartment on an adjacent property, told Afp. I have lived here 15 years and this is the first time I have seen something like this. I saw the smoke, a lot of people were in a panic. You could see that no one wanted to jump off the building. People were waving their arms from the windows, King added.

The injured were taken to five hospitals, many of them suffering cardiac and respiratory arrests, The New York Times reported. The expectation of health experts foresee that the number of victims will increase.

Images released on the FDNY Twitter account show flames capped by a thick column of black smoke rising from a second-story window.

The incident comes four days after a fire in Philadelphia killed 12 people, including eight children, in a three-story social building, in what was one of the deadliest accidents in the United States.

In December 2017, 13 people were killed in the flames that erupted in an apartment tower in the Bronx, the deadliest in the city in 25 years.

New York, with 9 million residents, is suffering from a huge housing crisis, with many of its residential buildings old and in disrepair.