Breaking the government of the African country Guinea, power in the hands of the army, sealing the borders 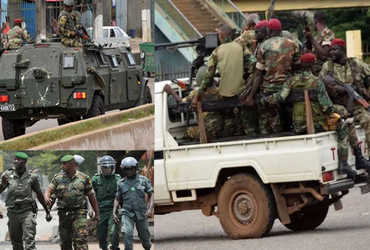 Military occupation of another country after Myanmar

Conakry: The government of the West African country of Guinea has been dissolved and its borders sealed. The announcement came after the Guinean military took control of state television. Currently, there are ongoing tensions between the military and the government over the power of the small country of Guinea. On the other hand, a huge fire broke out in Conakry, the capital of Guinea.

The bomber struck in front of a presidential palace in Conakry, Guinea, shortly after noon. The shooting comes amid reports that the Guinean military has seized power. It is not yet known what he will do after leaving office. However, a government official said the president was not injured in the shooting and was safe.

However, most of the government residences and the only bridge connecting Rashtrapati Bhavan has been closed. On the other hand the government of Guinea is in deep trouble. According to the report, the army has taken power in its hands like Myanmar. Three people are reported to have died in this firing.

However, no official announcement has been made. The capital of Guinea is currently witnessing a large influx of troops. On the other hand, the country’s borders have been sealed and the government has been declared a violation by the army on TV.