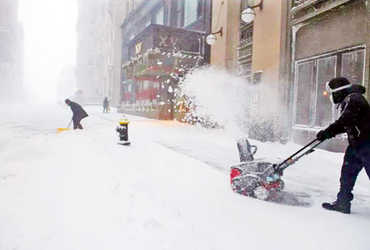 New York: A blizzard has disrupted life in the eastern United States. More than 70 million people are currently facing power outages in cities including Boston and New York due to heavy snowfall.

Apart from this, due to accumulation of large layers of snow on the roads in most areas, basic facilities including transportation have come to a standstill. The National Weather Service has issued an alert in the eastern US.

The most affected areas were Boston and New York. According to information released by the National Weather Service, the bomb cyclone created the situation.

According to meteorologists, bomb cyclones form when the air near the Earth’s surface rapidly rises into the atmosphere. Up to three feet of snow has fallen in some parts of Massachusetts. As a result, 117,000 homes were cut down.

Currently, people living in cities including New York, New Jersey and Boston have been warned not to leave the house. In addition, over 3,500 one-day flights have been cancelled. In addition, more than 25 centimeters of snow fell in Manhattan and the railroad was partially closed.