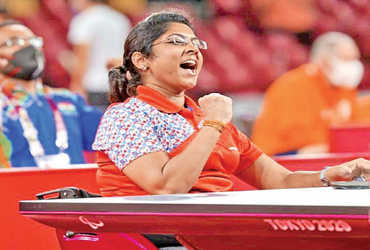 The future gold medal match will be with world number one Zhou Ying of China from 7.15 am today.

Tokyo: International Para table tennis player from Gujarat Bhavna Patel has reached the final of Tokyo Paralympics with a milestone. With this she became the first Indian player in the history of Paralympic table tennis to reach the final.

In the semi-finals, Bhawna defeated World No. 3 Zhang Mio of China 3-2 to qualify for the gold medal bout. Now that national hockey legend Major Dhyanchand’s birthday is being celebrated across the country tomorrow, Bhavna Patel will take on world number one Zhou Ying of China in the final, hoping to win a gold medal at the Tokyo Paralympics.

Bhavna Patel, 34, continued her impressive run in the Category 4 women’s singles event, winning the semi-finals in just 34 minutes. After losing the first game, Bhavna went on to win the second and third games instead of coming back heavily. Mio won the fourth game to level the score at 2-2.

Eventually in the fifth and deciding game, Bhawna made a big upset by beating the Chinese player with aggregate scores of 7-11, 11-7, 11-4, 9-11, 11-8. In the final, he will face the same player whom he lost in the first league match.

However, considering the way she has shown confidence with her stellar performance at the Tokyo Paralympics, she is considered a strong contender for the gold medal. This is Bhavina’s first win in her 12th match against former world number one Zhang Mio.

Bhavina defeated Shackleton of Great Britain after losing to Zhou Ying in the first group match at the Tokyo Paralympics. He then defeated Brazil’s De Oliveira in the pre-quarterfinals. Also in the quarter-finals, they advanced to the semi-finals with an easy 3–0 win over Rio Paralympic gold medalist Serbia Rankovi.