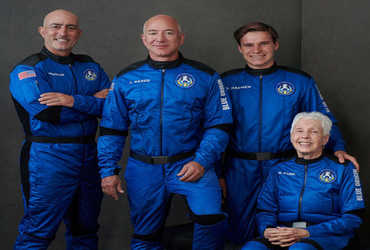 The New Shepherd rocket sits in a Blue Origin capsule and travels 105 km above Earth’s surface. went up and came back in ten minutes

Washington: Jeff Bezos, the world’s richest man, has returned to space. He crossed the Carmen line in the Blue Origin Shepherd spacecraft and returned to Earth. Bezos was accompanied by three passengers, the oldest being 8-year-old Wally Frank and the youngest, 16-year-old Oliver Damon Holland. He was accompanied by his younger brother Mark Bezos. Although the achievement of becoming the first astronaut is not written to his name, he has created a successful saga through Blue Origin. With this space flight knocking on the door of space, 6-year-old Wally Frank became the world’s oldest person and 16-year-old Oliver Damon became the youngest astronaut.

Bezos also became the second businessman to travel to space. Earlier, British businessman Richard Branson flew for Virgin Galactic. However they did not cross the Carmen Line. Earth’s gravity disappears as soon as it crosses this line.

Branson flew into space in a piloted rocket plane, in front of which Bezos’s capsule was fully automated. There was no staff on the ship to handle it. The whole process became automated as the rocket went up and then the capsule came out of it and a total of four people returned from space with Bezos. There was no one to handle it.

After sitting in Bezos’s New Shepherd rocket, the rocket propelled into space at three times the speed of sound. It continued in space until most of its fuel was exhausted. The capsule then detached from the rocket and returned to Earth after spending some time without gravity. The parachute then opened and the capsule landed successfully. The entire flight lasted ten minutes and 15 seconds. When Bezos and four others with him returned, they felt six times the force of gravity.

On this day, six years ago, Neil Armstrong became the first man to set foot on the moon. NASA’s Apollo 11 spacecraft, which took off from the John F Kennedy Space Center in the US state of Florida on July 17, successfully completed a four-day voyage and landed mankind on the Moon, Earth’s natural satellite, on July 30. The spacecraft remained on the lunar surface for 21 hours and 21 minutes.