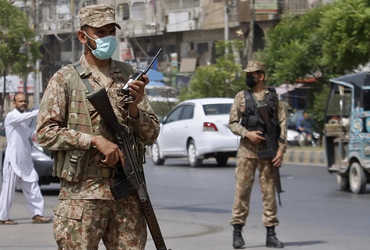 A rebel group named Baloch Liberation Army has attacked two Pakistani army camps in Balochistan. It is claimed that over 100 Pakistani soldiers were killed. The Pakistani army retaliated and killed 12 terrorists. The attacks targeted military camps in Panjgur and Nushki in Balochistan.
Baloch Liberation Army, a banned insurgent group in Pakistan, attacked two Pakistani Army camps in Balochistan. 100 Pakistani soldiers were killed. This figure was likely to be large. During the attack, 13 attackers were also killed in the firing.
Pakistan’s Interior Minister Sheikh Rashid Ahmed said in a video message that terrorist attacks have taken place in Panjgur and Nushki districts of Balochistan. In which four soldiers have been martyred. Twelve terrorists belonging to a terrorist organization have been killed. The Pakistani government did not acknowledge that a large number of soldiers were killed. Pakistan Prime Minister Imran Khan also tweeted something different about the terrorist attack. Imran Khan praised the soldiers for killing the terrorists. However, reports claimed that the Pakistani army had not released the exact number of soldiers killed.
Baloch Liberation Army has claimed responsibility for the attack. This organization is fighting for the independence of Balochistan. The group, which has been fighting for more than 150 years, has been banned by the Pakistani government as a terrorist organization. The local people are angry with the Pakistani government over the issue of discrimination and atrocities against the citizens of Balochistan. Ever since the Pakistani government allowed Chinese companies to build projects in Balochistan, the movement has intensified. Local people allege that Chinese companies have snatched the jobs and rights of the local people. Protesters in Balochistan are demanding the removal of Chinese companies or the creation of jobs for the local people. Local people are angry with the start of the China-Pakistan Economic Corridor project in Balochistan. That is why the Baloch army has carried out violent attacks claiming to protect the interests of the citizens of Balochistan.