Attack on Hindu temple in Pakistan, India called Pakistan Ambassador and sought reply on the incident 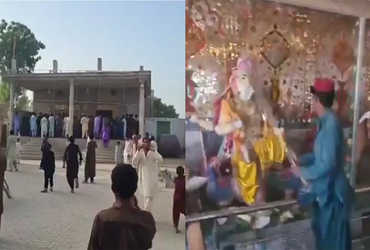 It is noteworthy that a temple in Punjab province was attacked by a mob and most of the temples were set on fire. Along with this, the idols installed in the temple were broken. Meanwhile, the police remained mute spectators and failed to stop the mob. The Pakistani army had to be called in to bring the situation under control.

Dr Ramesh Kumar Vankwani, MP from Prime Minister Imran Khan’s Pakistan Tehreek-e-Insaf (PTI) party, shared a video of the incident on his Twitter wall on Wednesday. He appealed to the law enforcement agencies to reach the spot and save the temple from vandalism. In several tweets, he said, ‘A Hindu temple has been attacked in Bhong town of Rahim Yar Khan district of Punjab. The situation is tense since yesterday. The negligence of the local police is very shameful. The Chief Justice should go ahead and act. Maintaining religious harmony is the need of the hour.