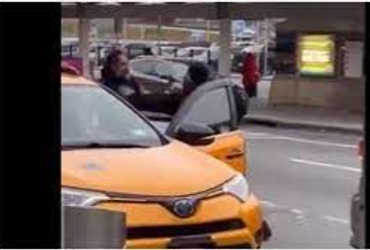 New York: Another case of hate crime has come to light in America. In the US, a Sikh taxi driver of Indian origin was attacked by a stranger and took off his turban. He was also abused. The incident took place outside JFK International Airport. This video of him has gone viral on social media.

A video by Navjot Pal Kaur that went viral on Twitter on January 4 shows a Sikh taxi driver being attacked outside an airport. He said that the video was shot by a person standing at the airport.

This man can be seen misbehaving in front of the victim. He repeatedly punches the Sikh driver and takes off his turban. Such incidents happen frequently with Sikh drivers. The incident had a profound impact on the local society.

Simranjit Singh, author and director of the Aspen Institute’s Inclusive America Project, tweeted that another Sikh driver has been attacked. This time the attack took place outside New York’s JFK Airport. Seeing this makes me really nervous. The fact that we can’t do anything about it makes it even more painful. We are now aware of the plight of fathers and elders of many of us trying to live honestly. Attacks on Sikh cab drivers in America are not new.

review with features, price and specifications