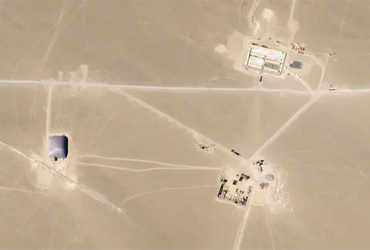 – Suspicion of developing a large number of nuclear weapons

Washington: China is significantly expanding its nuclear arsenal and has found another place to store a large number of nuclear missiles. 500 square feet in the desert near Hami in northern Xinjiang province. In the mi region, China is developing a massive structure for a nuclear missile base. 15 silos are under construction in this area.

Researchers believe that China is expanding its nuclear arsenal. In northern Xinjiang province, 110 silos could be developed in the desert near Hami, and each silo could house three missiles capable of carrying nuclear weapons. Researchers have discovered a site where 120 silos can be built 200 miles from the Chinese city of Yumen. Earlier, researchers had also discovered a site where a dozen silos could be built 60 miles east of Jilantai. A special construction for the storage of nuclear weapons is called a silo.

Researchers from the Federation of American Scientists, who discovered the silos at Hami’s site in China, said the construction of the silos in Yumen and Hami indicates that China is ramping up its nuclear arsenal. The secret satellite appears to have been secretly building on a special tented site. Roads and other supporting infrastructure have also been found around the site under construction.

In addition to 100 mobile launch pads, China is currently believed to have built 30 silos to store missiles and nuclear weapons. Researchers believe that there are currently more than 50 silos under construction at various sites in China. This means China could triple its number of nuclear missiles. According to a report released to the Pentagon last year, China currently has about 500 nuclear weapons.

no hydrogen peroxide, but these Mercadona wipes are a perfect option