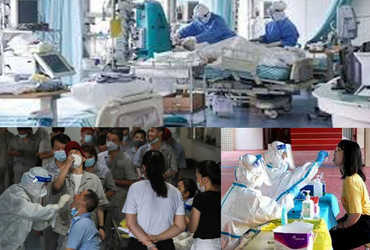 In the US, both doses are considered booster doses at six months.

New York: With the arrival of 3,28,395 new cases, the total number of new cases of corona in the world has increased to 215,773,323, while the death toll has gone up to 44,93,346 with 5,695 deaths. According to the website WorldDometer, in the last 24 hours, a large number of new cases of corona have been reported in the United States, India, Mexico, Russia and Iran and the death toll has increased rapidly.

The number of delta-type patients in the United States has increased so much that hospitals no longer have beds. The worst case is in Florida. An average of 21,000 new cases are being reported in Florida every day, in which 200 people have died.

On an average, 17,000 corona patients are admitted to the hospital daily for treatment. On Thursday, 16,550 people were hospitalized in Florida. According to the Florida Hospital Association, oxygen shortages are occurring in many hospitals. Oxygen is not enough for 48 hours in 68 hospitals.

Meanwhile, the US Supreme Court has allowed 3.5 million people to vacate their homes in the next two months. The implementation of the temporary moratorium on evictions due to the Corona pandemic by the Biden administration will now be hindered. A White House spokesman said the government was “disappointed” by the Supreme Court’s decision.

According to a report in the Wall Street Journal, the US health regulator may allow those receiving both doses of the corona vaccine to receive the third dose of the corona vaccine only after six months instead of eight months. A new study has found that adolescents between the ages of 12 and 15 are at higher risk of side effects when given the Pfizer corona vaccine.

Meanwhile, a study published in the Lancet journal found that about half of the corona patients who were to be treated in the hospital showed symptoms of corona twelve months after being infected with corona.

A study conducted on 1276 patients in Wuhan found that even twelve months after infection, one out of every three patients had shortness of breath. That’s why people who had severe infections were having trouble in their lungs.

The findings of this study show that it takes more than a year for some patients to recover from corona infection. This should be taken into account when planning post-epidemic treatment. Fatigue or muscle weakness were the most common symptoms.