America’s hospitals are full of patients, one million new cases of corona are being reported every day 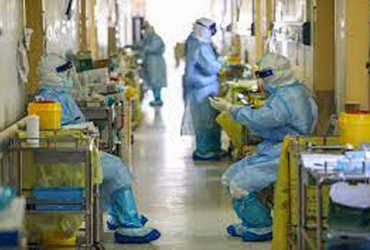 The total number of corona cases in the world is 20.1 million and the death toll is 42.7 million

Huge increase in deaths due to corona infection in Brazil, Russia, China and Pakistan

Washington: The Delta variant of Corona is making waves in countries around the world including America, Russia, Brazil and China. According to data released by Johns Hopkins University, the total number of corona patients in the world has exceeded 20.1 million, while the death toll from the epidemic has exceeded 42.7 million.

Restrictions have been tightened in Beijing after 107 new cases of corona were registered in China. Now it has been made mandatory to show negative test of corona to enter Beijing. In Pakistan too, 4720 new cases of corona have been reported in the fourth wave of corona in the last 24 hours and 95 people have died. The infection rate in Pakistan has exceeded nine percent.

After the registration of nine new corona cases, the total number of corona cases in Ladakh has increased to 20,378. At present there are 65 active cases in the Union Territory of Ladakh. A total of 207 people have died of corona in Ladakh so far.

Meanwhile in Britain, aides of Prime Minister Johnson Boris are angry that Johns has decided not to isolate for ten days despite a positive corona test.

However, a government spokesperson said the prime minister was not in close contact with anyone who tested positive. The Prime Minister’s aide traveled with the Prime Minister on a Royal Air Force Voyager flight between Glasgow and Aberdeen on Wednesday.

Singapore’s Health Minister Ong Ye Kung said in an interview that the number of corona cases is likely to increase due to increased movement of people due to the growth of trade and the economy.

He asked people to be mentally prepared for the matter. He emphasized the need to focus on corona vaccination and said that Singapore will now reopen in four phases starting Tuesday.

Transport restrictions will be eased and immunization lanes will be opened. In which travel between Singapore and selected countries will be allowed without being in isolation. Instead of staying at home notice, the emphasis will be on frequent testing.

With 80 per cent of Singapore’s population vaccinated against coronavirus, the country is now in the transition phase. At this stage, a maximum of five vaccinations will be allowed in bars and restaurants. From August 10, people will be able to eat food from the fair and also go to the coffee shop.

In the US, the CDC report also urged people who have been previously infected with corona and have recovered, as one study found that those who ignored the advice were twice as likely to be infected with corona again. CDC Director Dr. Rochelle Valensky said the best way to protect against the delta variant is to get vaccinated.

People who have been previously infected with corona and six months after recovery are more likely to be infected with the delta variant. Meanwhile, a prominent Indian-American Congressman, Raja Krishnamurthy, expressed disappointment over the United States’ allocation of only 7.5 million doses of Corona to India and urged the Biden administration to expand its global vaccination assistance program.

Raja Krishnamurthy, Pramila Jayapal, Senators Jeff Merkel and Elizabeth Ware have introduced the Nullifying Opportunities for Variant You Infect and Deceit Act. In whose favor there are 116 members. If this bill is passed, the government will be able to use $34 billion to make eight billion doses of the corona vaccine and help other countries fight the corona epidemic.