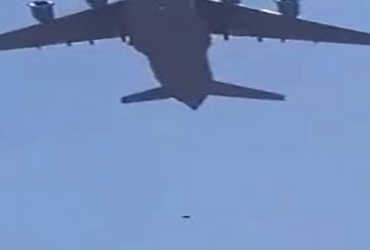 The two youths fled to the airport after hearing rumors of US-Canada harboring 20,000 Afghans.

Kabul: There has been an atmosphere of panic in Afghanistan since the Taliban came to power. Many pictures are going viral on social media in which Afghans are seen running away from Kabul airport. They are trying to run away from their country anyway. One such video has gone viral in which a man is seen falling from a US military plane.

In fact, both young men heard rumors that 20,000 people could be taken from Afghanistan to the United States or Canada. Fearing Taliban rule, both the brothers reached the airport to try their luck. A member of Razzaq’s family said that they fled without showing the family.

You picked up your personal ID from home and left for the airport. When the C-17 aircraft took off from Kabul airport from Afghanistan, the aircraft was very crowded. Three people are reported to have died after falling from the plane.

Razzaq and Kabir had six siblings and both were elders. Youth in Afghanistan may not have seen the Taliban regime between 2001 and 2001, but they have learned about the activities of the extremist group from their families. The young generation of Afghanistan does not want to see this freedom taken away.