America has said in a statement that Russia is 80 percent ready to attack Ukraine. 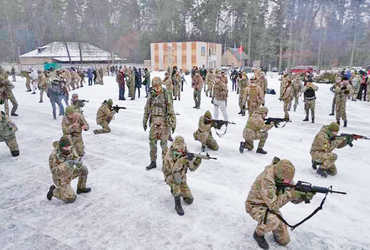 Russia is likely to send a message through a show of strength after a major war to prevent Western countries from intervening.

Washington: US officials say 80 percent of Russia’s military and strategic plans to invade Ukraine have been completed. Russia is expected to launch an invasion of Russia in mid-February after receiving approval from Russian President Vladimir Putin.

Russia’s Foreign Intelligence Service denied the allegations in a statement released Friday, saying, “Similar baseless allegations regarding Russian intelligence have been made more than once. US officials say that The War Study of the Strategic Nuclear Forces of Russia is conducted every autumn.

However, this year’s study is to be held between mid-February to March. Although there is no prospect of the use of nuclear weapons or missiles in the conflict, Russia may send a message to the West that it will not interfere with the Ukraine issue by studying war within Russia’s borders near the Ukrainian border.

The United States said in a statement that it was “providing” Russian intelligence and monitoring Russia’s “strategy” to prevent Russia from attacking Ukraine.

According to reports from some US officials in The New York Times and The Washington Post, Russia invaded and occupied Kiev, leaving more than 20,000 people seriously injured or at risk of death.

1,500 US Army soldiers stationed in Poland

Around 1,200 US Airborne Infantry soldiers arrived in Poland today, amid ongoing tensions between Russia and Britain. we. Passengers who disembarked from an army Boeing plane arrived at Reyshjów Jasika Airport in Poland today. Their commander is Major General Christopher Donahoe. On August 20, Major General Donahue was the last American soldier to leave Afghanistan.