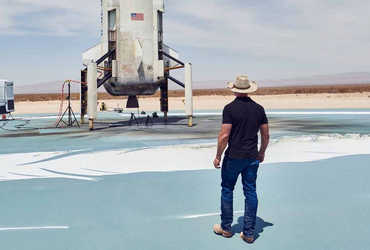 Amazon founder Jeff Bezos will travel to space on July 20 at 4.30 pm Indian time. For the first time in the history of space science, the rocket will be fully automated. After giving the launch command to the Master Control Center, the astronauts on board did not have to give any instructions. This visit will mark the beginning of a new chapter in space tourism.
Jeff Bezos’ spaceflight will be broadcast live from the Blue Origin website. The broadcast will start one and a half hours before the launch. Amazon and Blue Origin owner Jeff Bezos will travel in a fully automated New Shepherd capsule developed exclusively by the company. Apart from Jeff Bezos, his younger brother Mark Bezos will also accompany him. Also Oliver Damon, a 16-year-old student ticketed through Pilot Valley Friends and Donations, will also travel to space under the Blue Origin banner.
The New Shepherd Capsule has a seating capacity of six passengers. The spacecraft will launch from West Texas and reach an altitude of 110 km. At the same time, a new history will be created. Richard Branson had previously traveled to space on July 11, but his spacecraft did not reach more than 3 kilometers. Bezos and fellow astronauts will travel the space boundary known as the Karman Line. This space region, known as the Karman line, is the boundary between Earth and outer space. Blue Origin questioned Richard Branson’s Virgin Galactic spacecraft being below the Kerman line.
Jeff Bezos’ space journey will be of 11 minutes. Soon after launch, the rocket will separate from the capsule and land successfully. After this, the capsule will land in space with the help of a parachute. Blue Shepherd’s New Shepherd tested 15 out of 15 times with no errors. Jeff Bezos tweeted before spaceflight: The exercise is over. Now it has become difficult for me to wait for space flight.