All the mirrors of the James Webb Telescope are 1.6 million km away from Earth. far settled 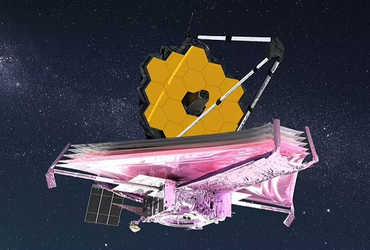 London: The James Webb telescope is a total of one million miles (1.6 million km) from Earth, covering a journey of 850,000 miles, NASA said. This mirror will be about the size and shape of a tennis court once it is perfectly aligned.

Thus the configuration of the $10 billion James Webb telescope in space is nearing completion. It is expected to be completed by January 23. The James Webb Telescope was launched into space on Christmas Day by an Ariane-Five rocket from the European Space Agency’s Port French Guiana.

After the telescope is set at L-2 point on February 9, its configuration will be complete. The James Webb Telescope has been in space for more than a month. Now it will slowly move in the direction of being aligned at the Lagrangian point. The Lagrangian point is the place where the gravity of the Sun and the Earth is balanced. This telescope will remain at this point for decades.

The famous Golden Mirror, used by astronomers for decades, is shaped into 18 individual hexagonal shapes. Each of these sections is controlled by seven actuators. Through this they will be able to perform agile and focused movements. They are all in their position now.

Due to the process going on for several days, they have been arranged ahead of schedule. NASA predicts that the telescope will begin sending its image to Fenugreek.

The US space agency began installing mirrors on January 12. It was planned to be completed in ten days, but it had already happened. However, even after this work is completed, the telescope is not yet in use for observation. Now the fine tuning of each mirror position will be done. This work will be done in such a way that it becomes a single ultra powerful mirror. This whole process will take three months. After that it will be tested and started.

He currently has a 21-foot gold-coated primary mirror. Joining the primary mirror segments to form a larger mirror means that each segment will be aligned with the thickness of fifteen thousandths of a human hair. Once the fine tuning is done, the James Webb Telescope will send its first image in May. It will be processed for another month and the image will be released in June. Altu Orbit’s distance from Earth is one million miles or 1.6 million km.