After the entry of Taliban, people forced to leave Kabul, there was a traffic jam, see VIDEO 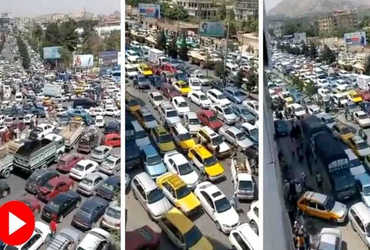 The Taliban have captured the city as soon as they enter Kabul, the capital of Afghanistan. Ali Ahmed Jalali was on Sunday elected to head the new interim government.

Negotiations are underway at the Presidential Palace (ARG) in Afghanistan to transfer power to the Taliban. Kabul’s troubles were increasing after the Taliban came to power at that time. People are giving information about the latest situation here by posting different types of videos on social media.

line of vehicles on the road

Masih Alinejad, an Iranian journalist and activist, posted a video of Sahara Karimi. In this video, Sahara is seen removing her mask for some time. Messiah Karimi tweeted with the video. The tweet said that the Taliban have entered the city. We are all running.

The tweet further states that this is not a scene from a horror film. This is the reality of Taliban. Just last week a film festival was organized in total and today everyone is running to save their lives. It is sad to see that people all over the world are not helping.

Capital Kabul right now, traffic blocked, everyone is in a hurry and rushing to their homes.#Kabul #Afghanistan pic.twitter.com/QqDXwUm5c7