Afghanistan under the control of Taliban militants 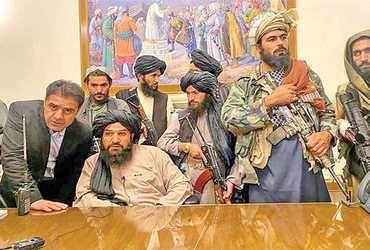 Kabul: On August 15, when India was celebrating Independence Day, Taliban terrorists in Afghanistan snatched the freedom of the people and completely occupied the country. Afghanistan has been completely under Taliban control since the Taliban captured Kabul, the capital of Afghanistan, on August 15. While President Ashraf Ghani is leaving Afghanistan and going abroad.

After which there has been an atmosphere of chaos in Afghanistan and people are going to the airport to flee the country. The situation is such that people are running on the runway of the airport and are ready to leave the country even if there is no space in the plane.

The Taliban have been invading Afghanistan since the United States began withdrawing its troops on May 1, capturing more than 10 provinces in a week this month. Since then, many Indians, Americans and citizens of other countries have left the country and returned to their homeland. As the Taliban entered Kabul on 15 August, President Ashraf Ghani also fled Afghanistan. He later issued a letter saying that he had left the country with the intention of preventing more bloody wars in Afghanistan.

The Taliban, on the other hand, have said they did not expect to take control of Afghanistan so quickly. With this, the bloody war waged by the Taliban for the invasion of Afghanistan has ended. The Taliban will now declare its leader in Afghanistan, as well as implement Islamic Sharia law, a law it previously enforced and barred women from working and leaving home alone. The law will be re-enforced by the Taliban. At the same time, preparations are on to change the name of Afghanistan. Whereas Taliban terrorists are now checking vehicles by making blockades in most cities.

The Taliban occupied Afghanistan from 2001 to 2001, during which time they persecuted women. However, in 2001, the United States sent troops to liberate Afghanistan from Taliban insurgents. Afghanistan’s 70 years of independence ended on 15 August. So now Afghanistan is back in the dark. On the other hand, citizens of other countries are in panic. The United States and India have accelerated the evacuation of civilians with the help of their own air forces. The US military is currently stationed at Kabul airport and is trying to evacuate its civilians. While India has also run its own aircraft.

At the same time, the Taliban has ordered the citizens of Afghanistan to stay in their homes till the 15th. And also assured that it will not harm the citizens of other countries. At the same time, the Taliban has started the process of announcing the name of its new president. The name of terrorist Mullah Abdul Ghani Baradar as the new President of Afghanistan is currently being discussed. Kandahar native and Taliban leader Mullah Abdul Ghani, along with militants, has captured Afghanistan’s Rashtrapati Bhavan and seized power.

The Russian embassy in Kabul said Afghan President Ashraf had fled the densely populated country with four cars and a helicopter laden with money. They gave up the rest because they could not afford it.

No one knows where Ghani is at present. He entered Afghanistan on Sunday and entered Kabul without facing any challenge from the Taliban. Ghani claimed that he had left Kabul to avoid bloodshed.

Russia has said it will continue its diplomatic presence in Kabul. He expressed hope that he would maintain relations with the Taliban. At the same time, he said that he was in no hurry to recognize the Taliban as the ruler of the country. He will first look at their behavior.

A spokesman for the Russian embassy in Kabul said witnesses said Ghani fled with four cars and a helicopter loaded with money. He said that he really wanted to pay more, but there was no room in the helicopter. Because of this, he had to pay the rest of the money.

Zamir Kabulov, special spokesman for Afghan President Vladimir Putin, said it was not clear how much money he had left. He said that he is hopeful that not all the money from the current budget of the country has been taken. Had this happened, it would have been a very bad situation for the country.