Afghanistan is now in the hands of the Taliban, capturing 18 states in the country 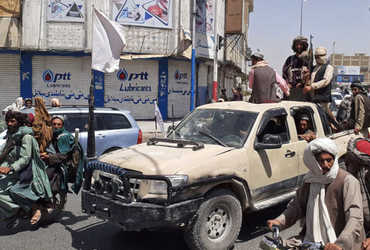 Afghanistan is now in the hands of the terrorist organization Taliban. It is not wrong to say that now. On Friday, the Taliban captured the capital of Logar province, just 50 kilometers from Kabul. This has increased the fear that Taliban rule will soon be established in Afghanistan. “The Taliban now have 100 percent control,” said Afghan lawmaker Saeed Qaribullah Sadat. Now there is no such thing as a fighting moment. Most of the officers have fled and have taken refuge in Kabul.

The Taliban have so far captured 18 provinces in Afghanistan. An Afghan official has confirmed that an armed group has also captured the western province of Ghor. Apart from this, the city of Firoz Koh is also now in the hands of the Taliban. Meanwhile, Britain, a US ally in NATO, has expressed fears that global terrorism could escalate if the Taliban takes control of Afghanistan. Britain’s Defense Secretary Ben Wallace said, “The way Afghanistan has failed, it will strengthen terrorist organizations like Al Qaeda and create a crisis for the Western world.”

“I am concerned that terrorists are making their base in such failed countries,” he said. Al Qaeda is likely to return. Meanwhile, Australia has started recalling all its diplomats. In addition, it will also provide shelter to Afghans who have supported NATO forces for the past 20 years. America has also given shelter to such people in large numbers. Australia closed its embassy in Kabul in May and withdrew all its troops in June.