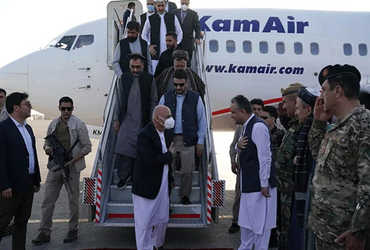 Moscow: The Russian embassy in Kabul said Afghan President Ashraf had fled the densely populated country with four cars and a helicopter laden with money. They gave up the rest because they could not afford it.

No one knows where Ghani is at present. He entered Afghanistan on Sunday and entered Kabul without facing any challenge from the Taliban. Ghani claimed that he had left Kabul to avoid bloodshed.

Russia has said it will continue its diplomatic presence in Kabul. He expressed hope that he would maintain relations with the Taliban. At the same time, he said that he was in no hurry to recognize the Taliban as the ruler of the country. He will first look at their behavior.

A spokesman for the Russian embassy in Kabul said witnesses said Ghani fled with four cars and a helicopter loaded with money. He said that he really wanted to pay more, but there was no room in the helicopter. Because of this, he had to pay the rest of the money.

Zamir Kabulov, special spokesman for Afghan President Vladimir Putin, said it was not clear how much money he had left. He said that he is hopeful that not all the money from the current budget of the country has been taken. Had this happened, it would have been a very bad situation for the country.