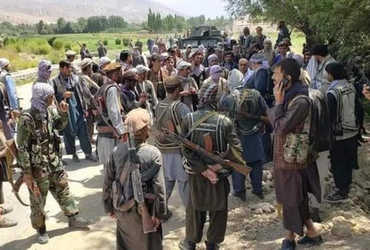 Ahmed Shah, the 32-year-old son of Panjshir leader Ahmed Shah Masood, has challenged the Taliban not to hand over the areas under his jurisdiction.

Fighters in Panjshir are battling the Taliban, which is preparing to form its government in Afghanistan. Anti-Taliban forces are posing a major challenge to Taliban fighters. On the one hand there is a confrontation between the two sides in Panjshir and on the other hand the Taliban has suffered a major setback in Baghlan province. One attack reportedly killed 300 Taliban and captured several others.

A massive ambush on the Taliban in Andrab, Baglan. This has had a huge impact on the Taliban. According to anti-Taliban fighters, 300 Taliban were killed in the attack. There are also reports of the capture of several Taliban.

Afghanistan’s Vice President Amrullah Saleh has also indicated an attack. A tweet against the Taliban said, “Ever since the Taliban came under attack, it has been a challenge for them to come back alive in one piece.” Now the Taliban has increased the number of its fighters in Panjshir.

Anti-Taliban fighters drove the Taliban out of three districts in the northern Baghlan province of Afghanistan. On Friday they captured Pul-e-Hisar, Deh Salah and Bano districts but the Taliban captured Bano on Saturday. Now Taliban is fighting to get back the remaining 2 districts. At the same time, Taliban fighters are moving towards Panjshir. They are preparing for a big attack there.

However, Ahmed Shah, the 32-year-old son of Panjshir leader Ahmed Shah Masood, has challenged that he will not hand over areas under his jurisdiction to the Taliban. At the same time, he insisted that he did not want war. But no one can escape a war if talks with the Taliban fail.