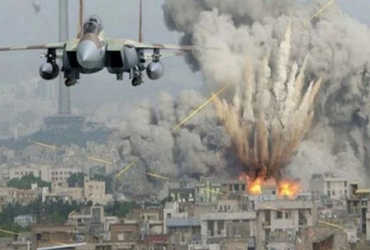 The Afghan army has intensified attacks on Taliban militants who are carrying out attacks with the intention of taking over Afghanistan. In the past few days, Afghan security forces have killed hundreds of Taliban in airstrikes and liberated many areas. The Afghan government also released a video on Twitter showing how a Taliban hideout was destroyed by a bomb. The explosion was so strong that a plume of smoke covered the sky.

Several terrorists have been killed in Kandahar’s Zorai district, while a large number have been injured and fled to save their lives. The government says at least 250 rebels have been killed and more than 100 wounded in 24 hours during the fighting in several major cities. The Afghan government has informed the world of the success of the security forces at a time when the Taliban was increasingly taking over Afghanistan after the withdrawal of US troops.

The Taliban recently claimed to have captured 85 percent of Afghanistan. The Taliban have intensified their efforts to seize major cities after gaining control of most of the countryside and capturing some important border crossings. Insurgents fired three rockets at Kandahar airport last night. It is the second largest city in Afghanistan and a rebel stronghold.

During the last 24 hours, 254 Taliban terrorists were killed and 97 injured as a result of the ANDSF operation in Ghazni, Kandahar, Herat, Farah, Jozjan, Balkh, Samgan, Helmand, Takhar, Kunduz, Baglan, Kabul and Kapisa provinces.

In addition, 13 IEDs were discovered and disabled by #ANA. pic.twitter.com/XiEiOAOuph