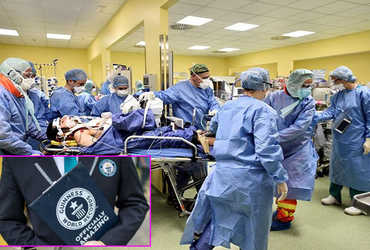 A total of 1667 hospitals, including 56 in India, were included in the study.

15,025 scientists contributed to the research of Indian-origin surgeon Anil Bhangu at the University of Birmingham

LONDON: A worldwide study conducted by UK experts in hospitals across the world, including India, has been dubbed the Guinness World Records. The world’s largest scientific collaboration involved 140,000 patients and 15,025 scientists from 116 countries.

The record for most authors involved in an academic paper is now held by the Universities of Birmingham and Edinburgh, with 15,025 scientists contributing to the study.

The study’s co-lead author, Indian-origin surgeon Anil Bhangu, said the aim of the study was to improve our understanding of the deadly coronavirus. This study attempted to understand how surgery can be performed in the coronary period and how its impact on the patient can be reduced.

This study prevented 58,687 corneal deaths in one year by pre-vaccination of patients seeking surgery. The study was conducted in 56 hospitals in India and a total of 1667 hospitals across the world. The study was funded by the UK Government’s National Institutes of Health Research. The study is published in the British Journal of Surgery.