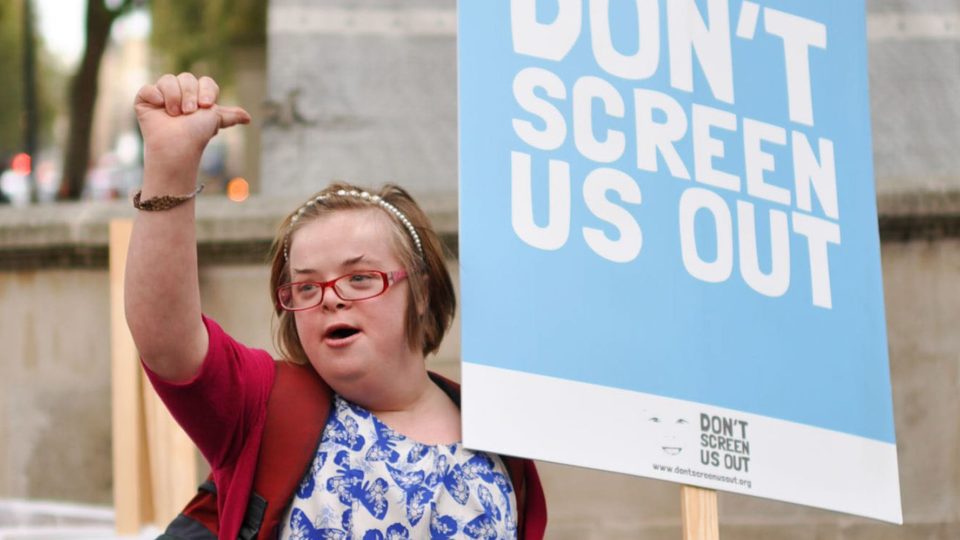 Briton Heidi Crowter, 25, is fighting to change the law that allows abortion of babies with Down’s syndrome until the end of pregnancy. Photo: Disclosure / Don’t Filter Us

In early July, Heidi Crowter, a 25-year-old Briton with Down syndrome, lodged a complaint against her country’s government over a law that makes abortion unrestricted for people with the same disease as it. In Great Britain, abortion is allowed until the time of birth in cases where babies have certain disabilities, including Down syndrome.

Heidi, who maintains a blog reporting updates on the case, says she feels discriminated against by the law. “What she’s telling me is just that my life isn’t as valuable as other people, and I don’t think that’s fair. I think it’s clear discrimination, ”he says.

British abortion laws were created in 1967 and the right was extended in 1990, when the possibility of aborting children with Down’s syndrome was introduced. “Right now in the UK babies can be aborted until birth if they are found to be ‘severely disabled’. They include me in this definition of “severely disabled” simply because I have an extra chromosome, “Heidi reviews on her blog.

In the UK, abortion law allows termination of pregnancy after 24 weeks’ gestation if there is a risk of death to the mother, a “serious fetal abnormality” or a risk that the child will be “seriously. deficient ”.

Heidi’s defense will argue that this law is discriminatory and contrary to the European Convention on Human Rights (ECHR). According to the document, “the right of everyone to life is protected by law” and “everyone has the right to respect for his private and family life”.

On her blog, Heidi quotes a recent resolution from the United Nations Committee on the Rights of Persons with Disabilities, which condemns the release of abortion for people with disabilities. “Unfortunately, the government decided to ignore these recommendations and did not change the law. So now I’m going to take the government to court with other members of the Down’s syndrome community to make sure people are not treated differently because of their disabilities, ”she said.

In the action, Heidi is accompanied by another plaintiff, Máire Lea-Wilson, who is the mother of a boy with Down’s syndrome and received three offers – made by doctors – to abort her son, but she refused. In an Internet campaign, the two men had already managed, until last Friday (15th), 107,300 pounds to sue the government.

The May BBC report covers the daily life of Heidi Crowter, from Coventry, England. She is married to James Carter, who also has Down syndrome. The two met on Facebook in 2017.

“We are both Christians and we love to sing hymns. But what we really have in common is that we love (UK series) Last of the Summer Wine, ”Heidi told the BBC.

Until early 2020, she worked at a children’s hairdressing salon in Coventry, helping to update the company’s social media and keep customers entertained, but the deal was made due to the pandemic , according to the BBC. In June of this year, she started another job, helping children with Down’s syndrome to sing and dance in an association for children with this disease.

Heidi is very fond of football, supports Liverpool and is a fan of Egyptian footballer Mohamed Salah. Also idol is singer Bruno Mars. “My favorite song is Just the Way You Are,” he tweeted in February.

Her parents only found out she had Down’s syndrome after she was born. Heidi was also diagnosed with leukemia, pneumonia, kidney failure and had to undergo heart surgery after birth.

Despite this, she managed to recover and her parents decided to treat her, as much as possible, the same way they treated her three siblings. At school, she repeated a year and ended up in the same class as her younger sister, reports the BBC.

As advice to parents who have children with the same condition, Heidi says, “Try not to worry. There are many groups of people with Down’s syndrome who will be able to support you, as well as many groups on Facebook. “

Abortion cuts births to children with Down’s syndrome by 54% in UK, study finds

Genetic selection – which is underway today not only in the UK, but in several European countries – is a scientifically proven reality.

In a study published in December 2020 by the scientific journal Nature, it was found that there is a significant reduction in the population of people with Down’s syndrome in Europe, and that this decrease is directly linked to the authorization of abortion by the laws of several countries. from Europe.

Between 2011 and 2015, according to the study, abortions of children with Down’s syndrome reduced the number of births to people with this disease by 54% in Europe. Researchers estimated that without the option of abortion, around 17,300 children with Down would be born each year during the same period, but with abortion the number dropped to around 8,000 children per year.

In the UK, the drop in the birth rate of people with Down syndrome was, on average across Europe, 54%. In countries like Ireland and Malta, where abortion is still severely restricted by law, the percentage was 8% and 0% respectively.

The most severe cases are in Spain, where the estimated reduction was 84%, and Portugal, where there was an estimated 80% decrease in births to babies with Down’s syndrome due to abortion legislation.