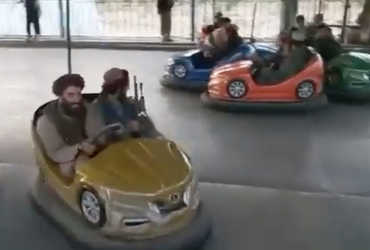 The radical Taliban have finally taken over Afghanistan. The photographs taken by Taliban leaders at Rashtrapati Bhavan have become famous all over the world. It is a symbol of transfer of power but video of Taliban leaders driving toy cars has gone viral on social media and people are making fun of it. . The video is being told of Rashtrapati Bhavan. Filmmaker Ram Gopal Varma, while sharing the video on Instagram, wrote that he has finally proved that these are children. Some people can’t stop laughing when they see big leaders enjoying driving little kids’ toy cars. Some even said that the poor man has never seen such a car. Lyricist Javed Akhtar reacted saying that America is such a superpower that is not capable of eliminating the tyrannical Taliban. Western countries should be ashamed of leaving Afghan women in the clutches of extremists.