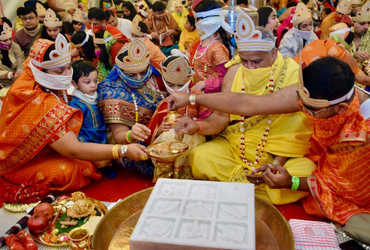 A magnificent Jain Derasar is being built in Melbourne, Australia under the rules of sculpture and scriptures. The foundation stone of the Jain Derasar was laid with the inspiration and spiritual guidance of Vallabhsuri Maharaja.

Talking about this, says Nitinbhai Doshi, president of Melbourne Jain Association. Families living abroad 10,000 km away from India and the coming generation should be connected with the rites of religion. This one idea has united the entire Jain community of Melbourne. Under this project, a person fasts daily till the resolution to build a derasar and a Jain community center in Melbourne, which is called chain fasting in Jainism. He has been observing a daily religious fast in Melbourne since August 15, 2015, which has led to a total of more than 15 fasts so far.

Nitinbhai further said that there are around 200 Jain families including all communities in Melbourne. The Jain community of about 1500 persons comprises 5% of the youth in the age group of 8 to 20 years. A program is prescribed every six months for the penance of the daily fast. Children, youth and adults who want to fast together by forming a WhatsApp group keep in touch with each other. It has also happened that some devotees have fasted 10 to 12 times for the resolution of the construction of the Derasar. Special care is taken that no fast is missed by mistake.

Melbourne-based Triptiben Shah says that all devotees consider the beginning of the construction of the derasar to be a historic moment and a step towards connecting future generations with faith. According to the information received, white marble stone is being carved from Pindwara Rajasthan for the construction of Derasar kept in Melbourne. Apart from the derasar, the complex will have a bustling center for religious worship, magazines, pratikramas, schools and other religious activities. The center will have a multi-purpose hall, dining room, library and kitchen. The total campus area including derasar center and car parking will be more than 50,000 square feet.

Over 5,000 stones to be brought to Australia via Indian Ocean

Just as the Jain Derasar in India is an incredible architectural marvel, the Jain Derasar in Melbourne will be beautiful and spectacular for all. Designed by Ahmedabad’s renowned Sompura Rajeshbhai for Melbourne’s Derasar, over 2,000 marble stones weighing 1,200 tonnes with beautiful carvings from India will be brought to Australia via the Indian Ocean. The carving work will be completed in about a year and a half. This derasar is likely to be completed and is likely to have prestige in about 205. Devotees associated with Melbourne Jain Sangh have worked hard throughout the management from door-to-door raising funds for the construction of the derasar. The derasar has become a participant in the construction in the form of flower petals.