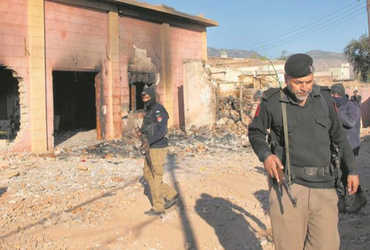 (PTI) Lahore, Ta. 3
A Hindu temple in Pakistan’s Punjab province was attacked and vandalized by some Muslim fundamentalists. Several idols of the temple were vandalized and the temple premises caught fire. The Pakistani government had ordered an inquiry into the matter. Cutting. The matter will also be heard in the Supreme Court.
A Hindu temple was vandalized in Bhong town of Rahim Yar Khan district in Pakistan’s Punjab province. A mob of some radical Muslims from the city stormed the temple premises and set the temple on fire. Destroyed the idols. The police did not control the crowd, so the Pakistan Reserve Force personnel had to be called.
Pakistan Tehreek-e-Insaf MP Dr. Ramesh Kumar Vankwani posted the video on Twitter. Hindu leader Dr. Ramesh Kumar had met the Chief Justice of the Supreme Court of Pakistan and demanded an inquiry into the incident. Thereafter, the Supreme Court judge announced an urgent hearing on the incident.
The government of Pakistan’s Imran Khan had ordered an inquiry amid criticism from all sides. An official statement from Pakistan’s PM’s Office said that the government is criticizing the attack on the Hindu temple and will conduct an impartial investigation into the incident.
Police have been deployed to maintain peace in the area. However, not a single person was arrested in this incident. The Hindu community has demanded the immediate arrest of the attackers.
The Indian government had summoned the Pakistani ambassador in Delhi in connection with the incident and sought an explanation. A spokesperson of the Ministry of External Affairs said that India had raised the issue of atrocities on Hindu minorities in Pakistan with the Pakistani ambassador.