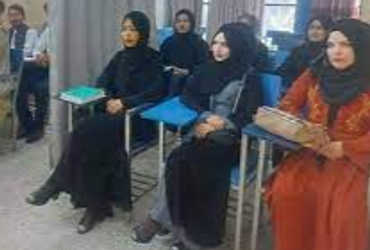 Afghanistan has been in political turmoil since the Taliban’s capture of Kabul on August 15. In the midst of this chaos, colleges and universities have risen. Tabila allows girls to study, but there are many restrictions ranging from wearing a burqa. This has changed the atmosphere of education in Afghanistan. A picture of Ibn-e-Sina University in Mazar-i-Sharif has surfaced in which the class is divided into two parts boys and girls and all the girls have veils on their faces. Tabilano has warned boys not to talk to girls on public streets.

Boys and girls are also kept away from the time of leaving the college so that they do not get a chance to talk. The Taliban have ordered that only female teachers take classes for girls, but the problem is compounded by the shortage of female teachers, so educational institutions have to work harder to recruit female teachers. Under the Taliban regime, women are not ready to enter education easily. The effect of the Taliban decree is now being felt in the streets of Afghanistan.

There was a time when there were over 3,000 female teachers in Afghanistan. Women and men were walking hand in hand in the streets of Kabul. Afghanistan used to wear Western dress as if it were a European country. Over the past 30 years, there have been attempts at democratic governance in Afghanistan, which has seen a slight improvement in the status of women, but the Taliban regime is now known for its radicalism and radicalization. Terrorist activities have returned to power. The Taliban talks of keeping women in high positions but that is only for example. Persecution of women has started throughout Afghanistan.