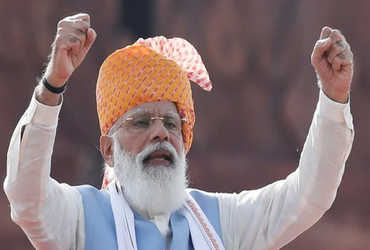 PM Modi has made 10 important announcements in his speech from Red Fort on the occasion of 75th Independence Day of the country today. which is like this.

On the occasion of Amrit Mahotsav of Independence in the country, 75 Vande Bharat trains will be started in 75 weeks and this train will run in every nook and corner of the country.

As the country celebrates its independence as well as the sorrow of partition, the country decided yesterday that 14th August will be celebrated as a day to remember the sad memories of partition.

We have to take the hand of the backward sections of the society and for that there is a new mantra that all together, development for all, all faith and all efforts.

Priority is being given to implement all the schemes of the government in 110 backward districts of the country. Work is being done to provide facilities like roads and electricity in the villages. Internet is reaching the villages and digital traders are being prepared in the villages. .

8 crore women in villages are associated with self-help groups. The government will set up an e-commerce platform to market its products.

The government will strengthen its schemes under which it gives rice to the poor. Nutritious rice will be made available through all the schemes by 2024.

The work of connecting all the capitals of the Northeast states by train is to be completed very soon. North East, Jammu and Kashmir, Ladakh and tribal areas will soon play a major role in India’s development.

Modern infrastructure is being developed along with the Central University in Ladakh. Preparations are underway for the upcoming elections in Jammu and Kashmir.