7 Taliban killed, over 100 injured in airstrikes in Afghanistan 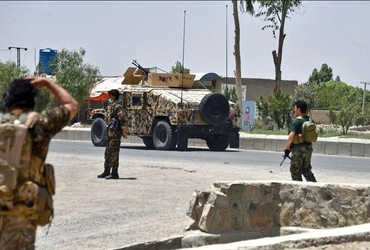 A civil war-like situation has arisen in Afghanistan after Western countries, including the United States, announced the withdrawal of their troops. The Taliban have launched a rocket attack on Kandahar airport in an attempt to capture the city of Kandahar, where the Taliban have captured most of rural Afghanistan. All flights from the airport have been canceled since the attack. On the other hand, the Afghan government has claimed that more than eight terrorists have been killed in the airstrikes carried out by the Afghan Air Force on several Taliban targets in the last four hours.

The Afghan Air Force has taken major action in the ongoing fighting between Afghan security forces and Taliban in Afghanistan. Over six Taliban militants have been killed and over 100 injured in airstrikes in different parts of the country in the past four hours. The Afghan Air Force carried out air strikes in 13 locations including Kabul, Kandahar, Herat, Helmand and Ghazni.

This is the biggest operation of the Afghan army against Taliban terrorists so far. In one such airstrike, a vehicle carrying a huge quantity of explosives was also blown up. A Taliban bunker in an area of ​​Kandahar was also targeted, killing 10 militants. Meanwhile, the Taliban, which has captured many rural areas of Afghanistan, has not yet been able to capture any major city. The Taliban launched a rocket attack on the Kandahar airport on Sunday to capture the city of Kandahar. A report quoting airport chief Masood Pashtun said three rockets were fired at the Kandahar airport in southern Afghanistan. All flights from the airport have been canceled since the attack.

Kandahar is still under the control of the Afghan government, but the Taliban are trying to take over. The Taliban have intensified attacks here in the last few days. Taliban attacks have forced people to flee their homes and live in refugee camps. The government has set up a refugee camp in Kandahar, which is home to more than 11,000 families.

Kandahar MP Syed Ahmed Sailab said a few days ago that the Taliban intensified attacks on Afghan forces after Eid. Common people in Kandahar are caught in the ongoing conflict between the Taliban and the army. As a result, hundreds of people have been forced to flee their homes in search of a safe place.

In April 2011, US President Joe Biden announced the withdrawal of US troops from Afghanistan by September. The Taliban have since reactivated and intensified attacks on Afghan forces.

The Taliban claims to have captured more than 9 percent of Afghanistan. Now they are trying to capture the cities. The number of civilians killed and injured in Afghanistan in the first six months of this year increased by 3% compared to last year.