7 days wedding of the daughter of the Sultan of Brunei, the bride was seen in a diamond-emerald crown 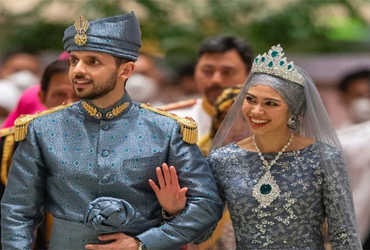 Princess Fadzillah Lubabul, the 36-year-old daughter of Brunei’s Sultan Hassanal Bolkiah, has married Awang Abdullah Nabil Mahmoud Al-Hashimi. During the wedding ceremony, the princess wore an emerald and diamond crown, pictures of which are going viral. The grand wedding began on January 16 and lasted for a week.

According to Forbes, the oil-rich Brunei’s Sultan Hassanal Bolkiah is one of the world’s richest dynasties, with a net worth of more than 20 billion. The Sultan has 2 wives and 12 children, and Lubabul, a graduate of Kingston University, is his ninth child. It is learned that the jewelery that Fadillah wore to the wedding was taken from the royal collection of her stepmother. She is the daughter of Sultan’s second wife and Sultan divorced her in 2003. The Sultan has a total of 4 children from his second wife, including 30-year-old Prince Mateen, an Instagram star.

The wedding took place at Nurul Iman, the official residence of the Sultan. One of the largest palaces in the world, the palace has 1,700 rooms and a large banquet hall that can seat 5,000 people. A wedding ceremony was also held at the Omar Ali Saifuddin Mosque.

Princess Fadzillah is the captain of the Brunei national netball team and her husband is from Iraq but lives in Canada.