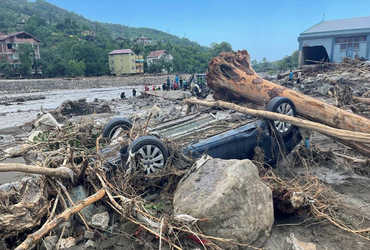 A magnitude 7.2 earthquake struck Haiti on Saturday. The coastal country is also facing the threat of a tsunami after a strong earthquake. The US Geological Survey has issued a tsunami warning. The epicenter of the quake was reported to be 12 km northeast of Saint-Louis du Sud. In the capital Port-au-Prince, people came out of their homes in panic, and after the loud tremors, gathered in the streets.

Earthquakes and cyclones have wreaked havoc in this disaster-stricken Caribbean country. In 2018, a magnitude 5.9 earthquake rocked the region, killing more than a dozen people. Most of the devastation happened in 2010. More than 3 lakh people died in the 7.1 magnitude earthquake.

Videos coming out of Pastel Haiti, after the 7.2 earthquake this morning. #HELPHAITI pic.twitter.com/5r1BL1twVQ