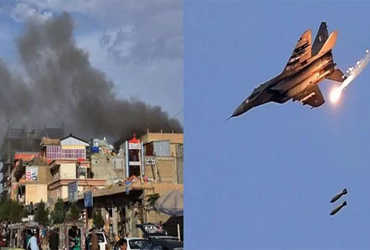 Kabul: Afghanistan’s Defense Ministry has claimed that it has killed 572 Taliban terrorists in the last 24 hours. However, Afghanistan also acknowledged that the Taliban had taken control of two major Afghan cities. The United States also carried out airstrikes on the Taliban and blew up several camps.

The Afghan Defense Ministry issued a statement claiming that 572 Taliban militants have been killed in the last 24 hours. Not only this, about 300 terrorists were seriously injured. The United States also assisted in the operation in Afghanistan.

US airstrikes have blown up several Taliban camps and killed nearly 200 terrorists. An Afghan spokesman said the US air force assisted Taliban militants and bombed them. About 100 Taliban vehicles were also destroyed in the bombing.

However, a hospital and a school were also accidentally blown up during the airstrike. Schools and hospitals were also bombed during the air raid in Helmand province. But since the area was under Taliban control, no damage was done. On the other hand, Taliban have started capturing one area after another in Afghanistan.

The Taliban captured two important cities in Afghanistan. The Afghan government said it had captured Sar-i-Pul and the city of Kunduz. Taliban militants occupied the area within hours of the attack. The Afghan army immediately withdrew from the area.