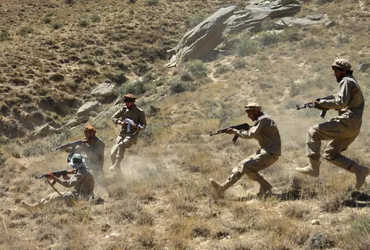 Although the Taliban have captured the whole of Afghanistan in just a fortnight, it is becoming increasingly difficult for them to capture Panjshir. The Taliban have not succeeded in Panjshir even 30 days after the capture of Kabul. Afghanistan’s only province, Panjshir, has raised its flag against the Taliban. Its NRF claimed to have killed 200 Taliban and captured more than a thousand on Sunday. As a result, civil war is expected to break out in Afghanistan. On the other hand, Prime Ministerial candidate Mullah Abdul Ghani Baradar has been injured in a shootout between the Haqqani network and the Taliban over power-sharing in the government.

After announcing the withdrawal of US troops from Afghanistan on August 21, the Taliban captured most of Afghanistan’s provinces in just a fortnight without protest. It also captured Kabul on 15 August, but Panjshir is the only province that has continued to oppose the Taliban. As a result, the National Resistance Force (NRF), led by Ahmed Masood and Acting President Amrullah Saleh, faced stiff opposition from the Taliban, who went on to capture Panjshir.

The Taliban claimed to have captured the Panjshir governor’s house on Saturday, but NRF spokesman Faheem Dashti tweeted on Sunday that around 200 Taliban militants had been eliminated in various districts of Panjshir this morning. More than 1,000 Taliban have been captured or surrendered.

The Taliban, on the other hand, said in a statement that fighting was continuing in Panjshir, but their pace had slowed as landmines were scattered along the road leading to the capital Bazarak and the provincial governor’s compound. Taliban spokesman Bilal Karimi claimed control of four of the seven districts, including Khinj and Unaba.

Fighting between NRF and Taliban continues in Panjshir Valley. The Taliban, on the other hand, cannot announce the formation of the government. “Given the current situation in Afghanistan, civil war is likely to break out at any time,” US General Mark Miley said. What is even more dangerous is the possibility of a re-emergence of IS and al-Qaeda.

Meanwhile, Afghanistan’s acting President Amrullah Saleh said that Pakistan’s ISI is looking after all its activities in Afghanistan since the Taliban took over. He called for the immediate intervention of the United Nations on the issue of fighting in Panjshir. He said that the ISI is managing the Taliban. He accused Western countries of betraying Afghanistan.

The soul in religions