50 arrested for attacking Hindu temple in Pakistan, offenses against 150 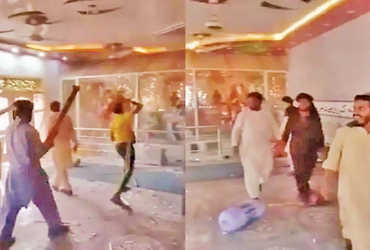 Protest against the release of an eight-year-old Hindu child

The trial was conducted on the basis of CCTV footage of the attack, photographs of the attackers were also released

Lahore: A case has been registered against 150 people while more than 50 attackers have been arrested in connection with the attack on a Hindu temple in Pakistan. The attack took place in the Punjab province.

In one case, only an eight-year-old Hindu child was released, in protest against which some Muslim fundamentalists started targeting Hindu temples. There has been a similar attack by extremists in the Punjab province of Pakistan.

Punjab Chief Minister Rahim Yar Khan said the arrest was made on the basis of video footage, adding that the attack on a Hindu temple was a shameful incident and the government would do everything possible to prevent any such incident in future. No one involved in the attack will be spared.

A total of 50 people have been arrested so far while the search is on for the remaining 150. The Punjab Chief Minister has also released photographs of those arrested. However, the district police officer said that all the main accused in the case have been arrested.