49 years after the pro-abortion law in the US, Biden calls for the federalization of that right 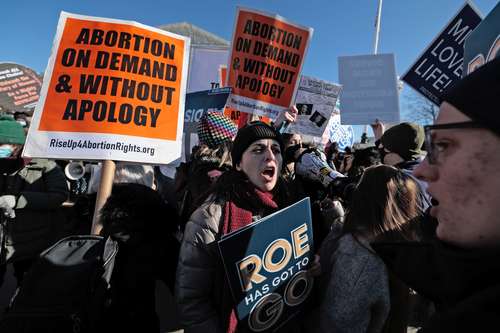 ▲ Anti-abortion activists and others calling for a federal law that protects that constitutional guarantee demonstrated yesterday in front of the United States Supreme Court in Washington, DC, on the 49th anniversary of the Roe vs. Wade court decision, which marked the legalization of the interruption of pregnancy in several states. Photo Afp

Washington. US President Joe Biden commemorated the 49th anniversary of the historic Supreme Court ruling that legalized abortion in the United States by again urging that this right be enshrined in federal law.

The constitutional guarantee established in Roe vs. Wade almost 50 years ago is today under attack like never before, the Democrat declared yesterday in a statement co-signed by Vice President Kamala Harris.

It is a right that we believe should be codified into law, and we are committed to defending it with all the tools we have, the letter states.

The free practice of pregnancy termination established in the 1973 Supreme Court ruling has come under constant attack: several Republican-led states have adopted rules that make it increasingly difficult for women to have an abortion.

Efforts to restrict access to reproductive health care have increased at an alarming rate in recent years, the Biden-Harris statement alluded to, citing new laws in Texas, Mississippi and other states.

The defenders of the guarantee to decide on the cessation of pregnancy fear that the current Supreme Court, made up, among others, of three conservative judges appointed by former President Donald Trump, will limit, or eliminate, that right.

In Washington, thousands of anti-abortion activists attended the annual protest on Friday. While others, in favor of that right, came to demand that the law be federalized

We anticipate an extraordinary Supreme Court decision in the coming months, said Julia Letlow, a Republican congresswoman from Louisiana.

The ability of a federal president to affect the law is limited, but Congress has the power to pass laws that protect the right to abortion.

The Biden-Harris administration strongly supports efforts to create a federal law in this regard, and we will continue to work with Congress in that direction, the White House statement said.

We must ensure that our daughters and granddaughters have the same fundamental rights that their mothers and grandmothers fought for and won on this day, 49 years ago, he added.