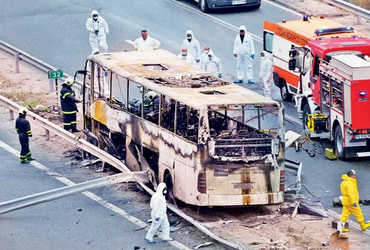 The bus caught fire while moving on the highway divider

The accident happened when a Macedonian tourist bus was returning to its homeland after completing a trip to Turkey.

Sofia: At least 45 passengers, including 12 children, were killed in a horrific bus accident on an international highway west of Bulgaria early Tuesday, the chief public prosecutor of North Macedonia said.

Macedonian public prosecutor Lubomir Veski told reporters that he personally visited the scene of the tragic accident on a highway in western Bulgaria on Tuesday morning.

The cause of the accident is yet to be ascertained, but prima facie it appears that the bus caught fire while moving along the highway guard rail (divider) or large stones placed at different places on the highway, he said. Some tourists from Macedonia, a country bordering Bulgaria, went on a trip to Turkey.

The prosecutor said the accident occurred when four tourist buses reached Turkey at the land border and were returning home after completing their journey. The injured passengers were taken to a nearby city hospital for treatment.