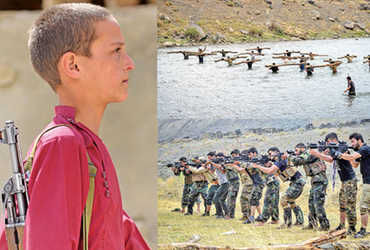 Taliban surrounded Panjshir from all sides

Panjshir’s guards also snatched many American weapons from the Taliban

Kabul: The Taliban have captured Afghanistan, but there is an area of ​​the country that has not been captured yet. This area is known as Panjshir. The Shruthanis here have decided to wage a war against the Taliban.

The Taliban recently killed 350 militants trying to retake Panjshir, while several others were kidnapped by Panjshir security personnel. The Taliban have now surrounded Panjshir and sent a message to local leaders saying “we urge the people of Panjshir to surrender.”

We don’t want violence of any kind, Panjshir is a big deal when you defeat the US and Afghan forces. Earlier, however, the Taliban had sent a similar offer of talks, which was rejected by the Panjshir leaders and they refused to surrender.

The Taliban also confiscated American weapons and vehicles. The Taliban are claiming that we are not attacking Panjshir to stop the violence, despite the fact that there have been previous attacks on Panjshir by the Taliban, in which more than 100 Taliban militants have been killed. While more than 350 shoots have been done so far.