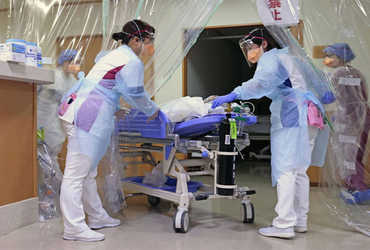 The entire city was sealed after getting only 31 cases in Nanking, China

Tokyo: A few days after the start of the Olympics in the capital of Japan, Tokyo has reported the highest number of 2,848 new cases of corona. Japanese Prime Minister Yoshihide Suga has urged people not to go out unnecessarily, but said there is no need to think about postponing the Olympic Games. He urged people to watch the Olympic Games on TV.

The Olympic Games are also now in danger of being hit by a storm. The previous highest number of 2,520 daily cases was recorded in Japan on 7 January. Now the total number of corona cases in Japan has crossed two lakhs and the fourth level of corona emergency has been imposed.

Experts say more infectious delta variants will increase the number of cases during the Olympics. He said they serve liquor to customers even though they have been banned from serving alcohol during emergencies.

The entire city of Nanking, which has a population of 9 million in China, has been sealed by the authorities after receiving only 31 new cases of corona. After getting new cases, the total number of cases has increased to 112. People working at the city’s airport were the first to be infected with the Delta variant.

Meanwhile, the International Monetary Fund (IMF) has said that the global economy will expand by six percent this year due to the slowdown. Percent. Meanwhile, British Prime Minister Boris Jones came out of self-isolation and announced a strict crime plan.

He announced measures to curb the crime rate by taking measures such as electronic tagging of rapists released from jail. Home Minister Priti Patel said, “We will deploy 20,000 new police officers in the city.” We want to make the society safe for all by reducing crime in the society.