27 killed in floods and landslides in Turkey 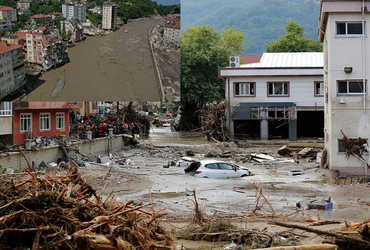 After the flash floods, many buildings collapsed like a pack of cards

Ankara: Landslides in various rivers and mountains of Turkey have so far killed at least 27 people and the possibility of the death toll rising cannot be ruled out. Rescue workers found 10 bodies on Friday and more than a dozen people are still missing, a government official said.

Extreme levels of flood risk were declared in several rural areas including Bartin, Kastamonu, Sinop and Samsun on the Black Sea coast.

The government has so far evacuated 1,700 people. The most affected areas were in Kastamu province, where water from a large spring entered the city and wreaked havoc on the town of Bojkut.

Extreme levels of flood risk were declared in mountainous areas and forests in the province, which is a favorite destination for foreign travelers such as the Mughals in southern Turkey and Anatolia. However, the forest fires claimed the lives of at least eight people and forced thousands to flee their homes.