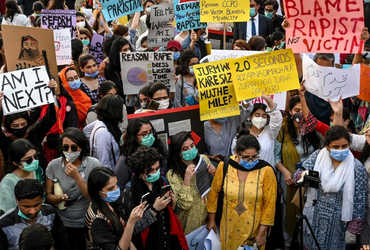 Lahore, DTE
According to Punjab Information Commission (PIC) data, over 2,500 women have been raped and 20 women murdered in the name of ‘family honour’ in Pakistan’s Punjab province in the past six months.
According to PIC data, 300 women were raped and more than 2,500 abducted in Lahore, the capital of Punjab province. According to a recent report by the Human Rights Commission of Pakistan (HRCP), an average of 11 rape cases are reported daily and over 3,000 cases were filed with the police in the six years from 2014 to 2015. According to the report, the society is giving false benefits to the attackers by accusing the victims. With a conviction rate of less than one percent in rape cases, the number of such cases has increased rather than decreased.
According to the report, out of 5,000 cases registered with the police, only four were convicted. Therefore, the rate of penalty has increased to 0.5 per cent. “It is unfortunate for the country that rape culture is rampant in Pakistan,” said Nida Kirmani, professor of management science at Lahore University. Victims of sexual assault are women who are convicted and all men are naturally violent. Many people are working to change this situation in the country, but this war will last for a long time. Recently, a 6-year-old girl with five children was raped by four suspects. But in the name of the honor of the family, the woman’s brother killed her.