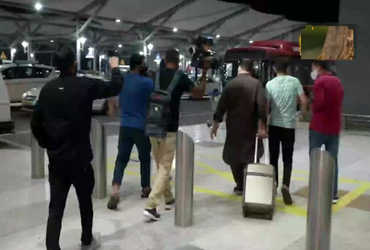 Afghanistan is occupied by the Taliban. Air India flight to Kabul has sent stranded Indians home safely. The flight reached Delhi from Kabul on Sunday evening with 12 passengers.

Rizwanullah Ahmedzai, senior advisor to former Afghan President Ashraf Ghani, has also reached Delhi. He said that there is peace in most parts of Afghanistan. Many ministers have left Kabul. About 200 people have come to Delhi.

Abdul Qadir Zazai, an Afghan MP from Delhi, said that a peace agreement has been reached between the Afghan government and the Taliban. It was just a handover process. Now the situation in Kabul is calm.

“I think it is the new Taliban that will allow women to work,” said Rizwanullah Ahmedzai, a senior adviser to the former Afghan president.

“I don’t want to leave the country,” said Syed Hasan Paktiwal, an MP from Paktia province. I came here for a meeting. I will go back to Afghanistan. The situation there is really bad.”

“I can’t believe the world has left Afghanistan,” said a woman from Delhi. Our friends are dying. The Taliban are going to kill us. There are no other rights for women.”

Former President Hamid Karzai’s cousin Jameel Karzai said a new government would be formed soon in Taliban-held Afghanistan. Whatever has happened. This is due to Asarphagni. He betrayed Afghanistan. People will not forgive him.