17 inches of rain in the US state of Tennessee: 22 killed, many missing 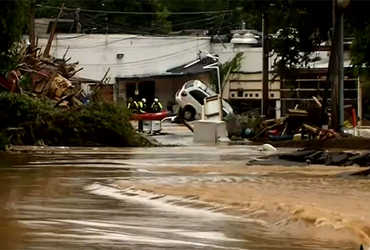 Tornado Forecast for Northeast US States

WASHINGTON: At least 22 people have died and many others are missing after homes were flooded with 17 inches of rain in the US state of Tennessee and flash floods in several cities in the state. Rescuers are still searching for people trapped in the water or under the rubble of homes.

Meanwhile, the National Weather Service said in Boston that a slow-moving storm system called Henry will see torrential rain in the northeastern states on Monday. The weather service has also predicted tornadoes along with heavy rain with very strong winds.

The rains wreaked havoc in most of the rural areas of the state as roads were completely washed away in rural areas, mobile phone towers collapsed and landline telephone lines came to a complete standstill.

This means that small towns in rural areas are cut off from larger cities, so people can’t even ask their relatives the distance,” said Humphrey County School security supervisor Kristy Brown.

Humphrey County Police Officer Chris Davis said many of the missing were living in areas where floodwaters had returned to small towns and villages. The police officer himself confirmed the news of 22 deaths.

The list of missing people has been put up on the notice board of the county’s emergency center, he said, adding that the dead included two twin girls who were drowned in floodwaters at the hands of their father. Survivors of the girl’s family and a foreman working on the farm of the county’s famed music star Loretta Lynn confirmed the incident.